In this lecture, we will discuss the geometry of properly convex subsets of \(\mathbb{R} P^n\). We begin by discussing an important invariant from 1-dimensional projective geoemtry that will be the basis for a metric on properly convex domains.

where a limit is taken if one of the points is \(\infty\). The cross ratio has many useful properties which we now outline.

Property 4 can be viewed as a metric property. Specifically, the cross ratio allows us to put a metric on the interval \((a,b)\) using the formula \(d_{ab}(x,y)=\log([a:x:y:b])\) for \(x,y\in (a,b)\). Property 4 ensures that this metric satisfies the triangle inequality. We now discuss some comparison properties of this metric 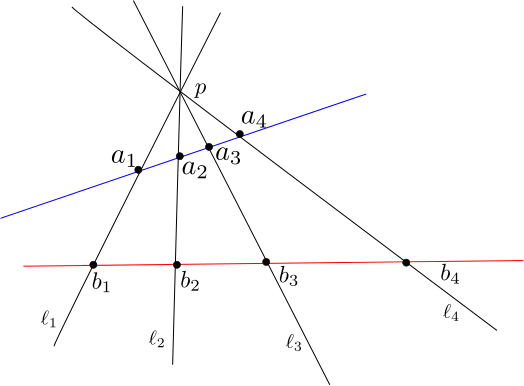 Let \(\Omega\subset \mathbb{R}P^n\) be an open properly convex domain and let \(x,y\in \Omega\). Since \(\Omega\) is properly convex the projective line connecting \(x\) and \(y\) intersects \(\partial \Omega\) in two points \(a\) and \(b\) and we define the Hilbert distance betwee these points as As a result we see that

We can realize a projective triangle as 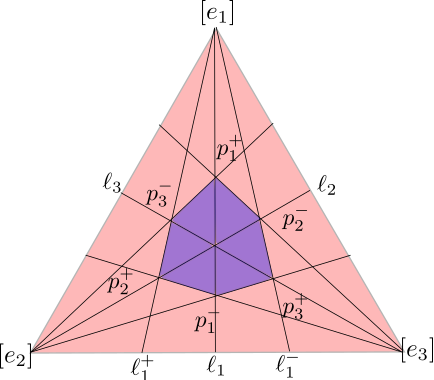 An interesting and fun fact that can be easily verified from the above picture is that for this metric \(\pi\) (i.e. the ratio of the circumfrence and the diameter of a circle) is 3.