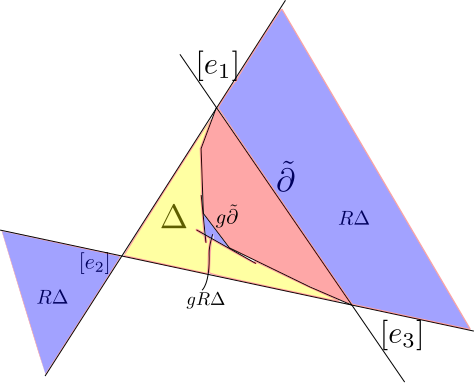 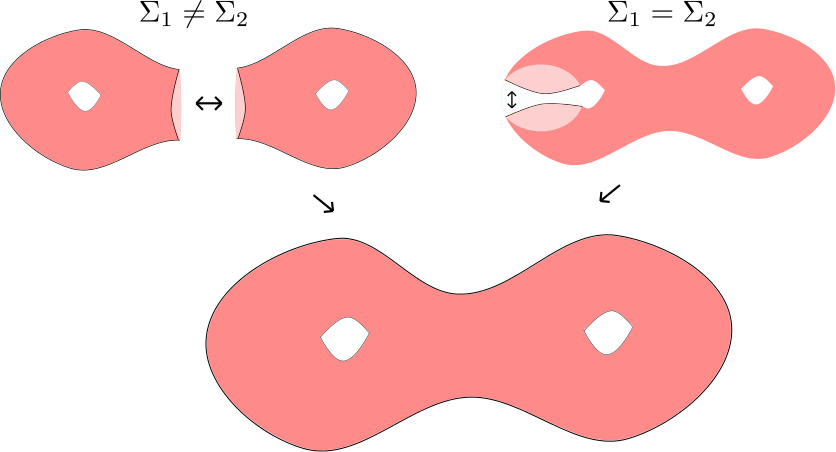 We will focus on the case where \(\Sigma_1\neq \Sigma_2\), as the proof in the other case requires only small modifications.

Using this description it is a very simple matter to describe the developing map. If we let \([(\gamma,p)]\in \tilde \Sigma\) then

In order to prove the above theorem we will show that \(Dev\) is an embedding onto a properly convex subset of \(\mathbb{R}P^2\). This will be done by applying a ping-pong arguement. The crux of this argument is the following fact that follows from the main lemma from the previous lecture. Let \(\gamma\) be such that \(\langle \gamma\rangle=\pi_1\partial\) then for any \(g\in \Gamma_1\setminus\langle\gamma\rangle\) \(g\Omega_2\subset \Delta\setminus \Omega_1\) and for any \(g\in \Gamma_2\setminus \langle \gamma\rangle\) \(g\Omega_1\subset R\Delta\setminus\Omega_2\).

We can now play ping-pong. As usual, there are a few cases to consider. First, suppose that \(g_m\in \Gamma_2\). In this case

In the case where \(g_m\in \Gamma_1\) we simply observe that \(\Gamma_1\) preserves \(\Omega_1\) and then apply the above argument to \(g_1\cdots g_{m-1}\). As a result \(Dev\) is injective. Since developing maps are in general local embeddings we conclude that \(Dev\) is an embedding onto its image, which we now show is a convex set. The image of \(Dev\) can be constructed as an increasing union of tiles. It is easily verifed that the connected union on tiles has locally convex boundary and is thus convex. Therefore the image of \(Dev\) is an increasing union of convex sets and is thus convex. To see that the image is proper we observe that the above ping-pong argument actually shows that

and this last set is disjoing from any hyperplane passing through \([e_2]\) and disjoint from \(\Delta\cup R\Delta.\) This completes the proof of the theorem.

While the above theorem tells us that we can convexly glue properly convex surfaces along principal boundary components provided their boundary geometry matches, it does not tell us in how many ways this can be done. It turns out such a gluing can be done in 2 dimensions worth of ways. More concretely, since \(\pi_1\partial\) is conjugate into \(D^+\) we see that \(\pi_1\partial\) is centralized by a fixed conjugate of any element of \(D^+\). Given such a centralizing element \(\alpha\) we apply \(\alpha\) to \(\Omega_2\) in our construction of the developing map. Different choices of \(\alpha\) give rise distinct marked convex projective structures. Informally, the geometries of \(\Sigma_1\) and \(\Sigma_2\) are indepentent of \(\alpha\). What \(\alpha\) is affecting is the way that these structures are glued together.