The proof of this theorem involves a double induction on the Euler characteristic and number of boundary components. The base case of which the case of a pair of pants \(P\). Specifically, we prove the following.

Theorem 2: The space \(\mathfrak{B}(P)\) of marked convex projective structrures on \(P\) with principal boundary components is a cell of dimension 8.

The proof of Theorem 2 consists of constructing an explicit system of coordinates. In order to define these coordinates, we first need a diversion into flags in vector spaces.

A simple computation shows that if we normalize our flags as above then their triple ratio is equal to \(d\). It is also easy to check that the triple ratio is an \(SL_3(\mathbb{R})\)-invariant function on triples of flags. Henceforth, we will think of generic triples as being parameterized by their cross ratio.

Finally, we discuss how to parameterize \(Conf_4^\ast\). We will prove the following lemma 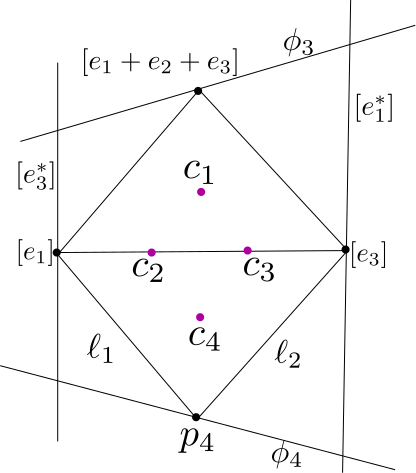 We now discuss some qualitative differences that occur when the values of the \(c_i\) are positive. When all of the numbers are positive, the point components of the flags form the boundary of a quadrilateral that is disjoint from the flag components of all of the flags. This is illustrated in the above figure. The picture is less nice when some of the corrdinates are negative. For example, if \(c_2\) and \(c_3\) are negative the point \(p_4\) is contained in one of the triangles spanned by \(p_1\), \(p_2\), and \(p_3\).

We now show how we can use these coordinates to parameterize convex projective structures with principal boundary on pairs of pants. Let \(Q=(\mathbb{R}^+)^8\).

Proof sketch: Given a pair of pants \(P\), it is possible to decompose \(P\) into ideal triangles \(\tau_1\) and \(\tau_2\) by cutting along 3 curves spiraling along the various boundary components. We can label the faces of these two triangles with numbers \(c_1\) and \(c_2\) and use 6 additional numbers to label the three edges of the triangulation (with two numbers each). We can lift this triangulation as well as the labelling to the universal cover \(\tilde P\). Using the labelings on the triangulation of \(\tilde P\) we can define the developing map for a projective structure by building the flags in \(\mathbb{R}P^2\) dictated by the numbers decorating the triangulation. By construction we see that since the coordinates are positive we can realize the image of our developing map as an increasing union of convex sets and thus the entire image is convex. The fundamental group is generated by curves \(A\), \(B\), and \(C\) encircling the boundary components of \(P\) and so \(\pi_1P=\langle A,B,C\mid ABC=1\rangle\). If \(T_1\) is a lift of \(\tau_1\) then there are three adjacent copies of \(\tau_2\) to \(\tilde P\) which we denote \(T_a\), \(T_b\), and \(T_c\). The convention being that \(A\) takes \(T_b\) to \(T_c\) and a similar convention for the other triangles. This configuration is shown below. Since there is a unique projective transformation between any pair of triples of generic flags with the same triple ratio, we see that we can also define the holonomy representation for this projective structure. 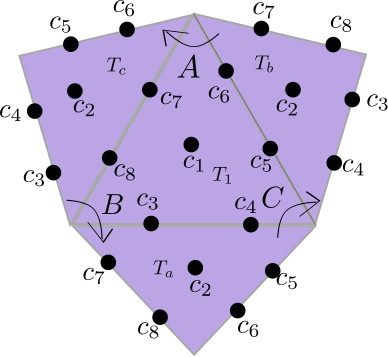 Conversely, given a convex projective structure on \(P\) with principal boundary components, we can produce an equivariant collection of flags (where the flag at each vertex is dictated by the holonomy fixing that vertex). Since the developing map of this structure is injective with convex image we see that the cooridinates for our flags must all be positive.